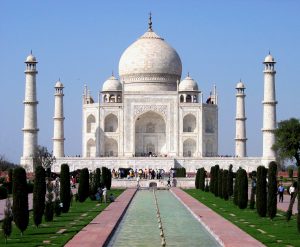 The Taj Mahal was commissioned by Shah Jahan in 1631 to be built in the memory of his wife Mumtaz Mahal, a Persian princess who died giving birth to their 14th child. Construction of the Taj Mahal began in 1632. Shah Jahan’s grief after the death of Mumtaz Mahal, was such that he commissioned for Taj the building to honour his dead wife. The mausoleum was completed in 1643, and the surrounding buildings and garden were finished about five years later. Construction of the mausoleum was essentially completed in 1643 but work continued on other phases of the project for another ten years.

The tomb is the central focus of the entire complex of the Taj Mahal. It is a large, white marble structure standing on a square plinth and consists of a symmetrical building. All sides of the building are exactly the same as the next one. The most spectacular feature is the marble dome that surmounts the tomb. The dome is nearly 115 ft high. Because of its shape, the dome is often called an onion dome.

In line with the Islamic prohibition against the use of idol forms, passages from the Qur’an that comprise, some of the decorative elements.

The Taj Mahal is built on a parcel of land to the south of the walled city of Agra. The Taj Mahal was constructed using materials from all over India and Asia. It is believed over 1,000 elephants were used to transport building materials. The translucent white marble was brought from Makrana, Rajasthan, the jasper from Punjab, jade and crystal from China. The turquoise was from Tibet and the Lapis lazuli from Afganistan, while the sapphire came from Sri Lanka. In all, twenty-eight types of precious and semi-precious stones were inlaid into the white marble.

According to the legend, Shah Jahan decreed that anyone could keep the bricks taken from the scaffold, and thus it was dismantled by peasants overnight.

No evidence exists for claims that describe, often in horrific detail, the deaths, dismemberments and mutilations which Shah Jahan supposedly inflicted on various architects and craftsmen associated with the tomb. Some stories claim that those involved in construction signed contracts committing themselves to have no part in any similar design.

According to the legend it is believed that Shah Jahan had planned to construct another Taj Mahal in black marble on the other side of the river but the war with his sons interrupted his plans.